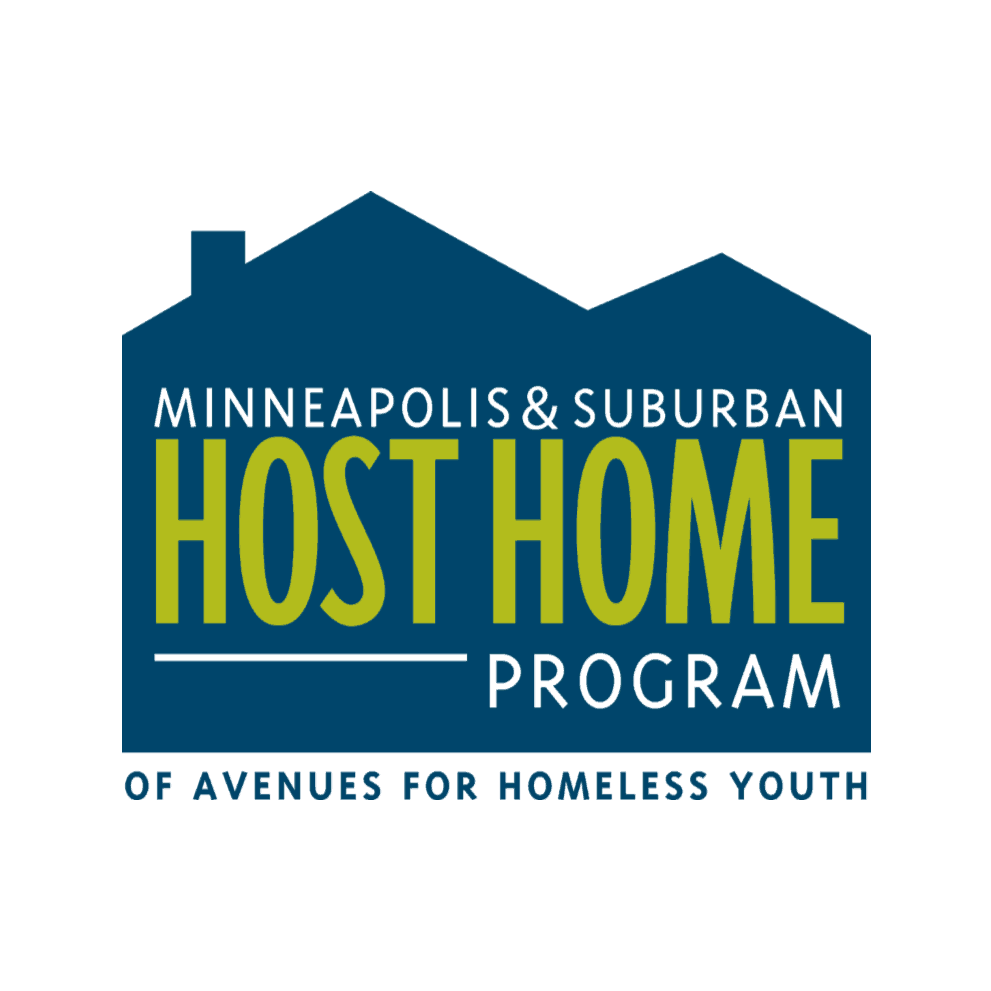 On any given night in Minnesota, more than 6,000 youth ages 16-24 experience homelessness. That number is reported by Wilder Research’s 2015 tri-annual study on Minnesota’s homelessness.

According to Deborah Loon, executive director of Avenues for Homeless Youth, the state defines youth homelessness as applying to anyone under age 25.

“There’s a recognition that the adolescent brain isn’t fully developed until about age 24,” she said, explaining the need to assist young adults as well as teens facing homelessness.

Avenues for Homeless Youth has served this demographic since 1994, with shelters in Brooklyn Park and north Minneapolis. Together, the two shelters can accommodate up to 33 youth, and the organization helps more than 300 homeless youth each year.

Avenues for Homeless Youth Home Host Program Manager Ashley Morgan, the community liaison for the program. (Submitted photo)
There are now six programs that are part of Avenues, including four host home programs that seek community members to host a homeless youth at their homes for at least a year, to provide a stable, temporary living environment. Two of the programs specifically serve youth who identify as LGBTQ, and another provides rent subsidies for single- or double-parent families to help them obtain their own housing and support.

Launched in 2012, the Minneapolis and Suburban Host Home Program serves youth throughout Hennepin County, including the northwest and other surrounding suburbs, and helps youth stay in their own communities, enabling them to stay close to their schools and jobs. Currently, there are no hosts in the program, so Avenues is reaching out to the community in hopes of finding people who are willing to provide a space in their homes for these youth.

Program Manager Ashley Morgan said that there is always a need for hosts, and that referrals come in on a weekly basis from case managers, service providers, and other people who work closely with homeless youth for those who could benefit from the program. Locating hosts is a major priority for her and her colleagues.

“Usually people have been wrestling with the thought for a couple of years. They heard us speak at their church or out in the community, and then they’re like, ‘Okay, we had to redo our basement,’ and had all of these other things happening, and then they’re ready,” Morgan said.

She is the person interested hosts reach out to, and she facilitates the process of learning more about hosting a homeless youth, including initial questions and answers, training and matching.

“The process is very one-on-one. People usually reach out to me after seeing us or hearing about us, and we’ll go out to coffee, talk individually, and answer questions that they have,” she explained.

After the initial discussion, which typically spans two to three meetings, if the interested party would like to continue to move forward in the process, it becomes slightly more formal. There is an application and a routine background check, and a 16-hour training session that is required. The training, which usually takes place over the course of a weekend, contains panels of former hosts as well as former homeless youth, and covers a wide range of topics.

The panel also gives potential hosts a glimpse of day-to-day life hosting a youth, as well as issues that hosts and youth might face.

“That’s the real meat of the training. It’s really about hearing the experiences,” Loon added.

Every stage of the meetings and training is non-committal, and anyone is welcome to attend to further their own understanding, Morgan emphasized.

“It’s open to the community, folks who would like to learn more about youth homelessness or hosting,” she said.

There are numerous stereotypes about homeless youth that Avenues works to deconstruct through education and experience. Morgan said many times, after hosting for the first time, people gain a new perspective on the issue.

“I think a lot of people come into the program with this idea of what homelessness looks like. You can tell the difference when you talk to them at the beginning and at the end. I think people have a better understanding of issues around trauma and how that affects teens, and also what the face of homelessness is. This is ‘us and us,’ versus ‘us and them.’ They’re people, they’re human. It’s not often as cut and dry as when people think about homelessness – they think about runaway teens, or ‘Maybe they’re homeless because they just can’t follow any rules.’ That’s just not the case,” she said.

Hosts are asked to commit to at least 12 months, and some continue for as long as two years, although after that they are required to take a break before hosting another youth, which most do continue to do. There are no income requirements for a host, although there are needs that must be met.

“It’s mainly that they’re able to share food and provide stable housing and space,” Morgan said. Anyone, whether a single apartment dweller with extra space to share or an entire family with a larger house, is welcome to become a host.

Loon added that it’s important that hosts focus on providing the safe, understanding space and leave other forms of support to the professional network the youth will have previously established.

“We don’t ask hosts to become case managers, and ideally, they don’t want to do that. Their role is not to save anybody; it really is to be a stable home so a young person – let’s say they’re finishing high school – can stay in their home district and not have to head from the suburbs into the city to get support. That’s really the basic foundation of this program, being able to stay in their community where they’ve got their networks, where they might have their jobs, and just giving them some time and space,” Loon said.

The program serves youth ages 16-24, although the average age is 17-19. Youth ages 16 and 17 are considered minors, so their own parents are required to sign a delegation of parental authority, which transfers basic rights to the host, such as speaking with the child’s school or medical professionals. It does not grant full parental authority to the host for major decisions, such as relocation or adoption, but it makes the role of a host more clear and removes some blurred lines.

A prospective host will receive home visits to get a feel for the living environment and cleanliness of the home, making sure it’s safe. Then, they’re added to a pool of hosts. The process of matching youth with hosts is designed specifically to empower the youth to feel more control over their lives and environment, so rather than random placements, youth are able to look at profiles of each available host and choose ones that resonate with them.

“Sometimes they’ll meet more than one, sometimes they know, ‘nope, I want to meet that person,’ and we start initiating the process of them getting to know you,” Morgan said. “We’ll do some visits out in the community where I’m present, and then we’ll do some where it’s just them when they’ve built that comfort and trust with one another. It’s very organic. Everybody gets the opportunity to share with me and with their case manager how they’re feeling about this potential host situation, and if they are all in agreement, which most of the time they are, after a few visits.”

From there, the youth can determine whether they’re ready to live under the host’s roof or if they need extra time. Loon said the rate at which they move in is largely determined by need.

“If they’re in a safe place, like staying at a friend’s house or something, it’s not necessarily a really urgent situation, and that’s ideal. But if it’s urgent, then we obviously try to move it along more quickly, like if they’re on the streets or not in a safe place,” she explained.

Morgan said hosts have boundaries for what they’re responsible for.

“We’ve been asked before, ‘what if the youth needs clothes and I’m not in a position to provide that?’ That is not an expectation we have of our hosts, so we work really hard with other agencies to make sure that the youth have all of their needs met.”

She said youth typically have a relationship established with an outside support network, including case managers and advocates, before entering into a host home.

“The questions I’ve gotten are typically around what to do if there’s a problem, if things are tense or aren’t working out. The way the model is set up is that I am the main support for the hosts, and then we also make sure the youth have case management or an advocate that they’ve been working with,” she said. “We do monthly home visits. The minimum requirement is one time per month, but we can definitely meet more than that, and sometimes we do. We also have ongoing training and community groups for all past, present, and future hosts to come and talk about hosting in general and that experience. (There’s) lots of support and lots of one-on-one attention.”

People with any level of interest in hosting are encouraged to reach out to Avenues. Loon said many people find the program leaves a lasting impact on their lives.

“We always tell hosts that they can expect their lives to be changed in ways that are unexpected. It’s a beautiful thing,” she said. “It’s really about community. I think that when we’re talking with people and trying to understand what’s motivating them, it’s really about people who have a sense of community and the youth in the community, as opposed to having a need to save somebody, because that doesn’t tend to work.”

She said that empowering youth to feel more in control of their lives is key, and that the motivation to host them is meaningful.

“The hosts are doing it because they want to, not for any other reason. From a young person’s perspective, that’s really important,” Loon said.

Avenues is always accepting donations. There is a specific need for in-kind donations of items like bedsheets, dishware, pots and pans, and other furnishings for youth who are moving into their own place for the first time. Winter gear is also needed. For a complete list of needed items, visit avenuesforyouth.org or contact Rachel Blair at 612-844-2001 or at rblair@avenuesforyouth.org.

The next home host information session is 6-7 p.m. Tuesday, Sept. 5, at Uptown Community Gathering Space, 3554 Bryant Ave. S., Minneapolis. At this session, people interested in hosting can learn more about the program. The next scheduled training session is set for Sept. 23-24.

To learn more about hosting or to schedule a one-on-one meeting, contact Ashley Morgan at 612-968-1672 or at amorgan@avenuesforyouth.org.